Another day another drama!!!!

With a week to the Dinghy Show the absolute last thing we need is a fire at the galvanizers, luckily nothing got damaged, but it has held up the job for 7 days.

Now we are gridlocked with all the  new work in the system, and annoyingly most of this work is for export.  The only good news is we are all still living the dream. 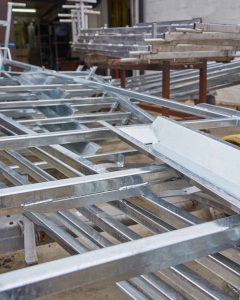 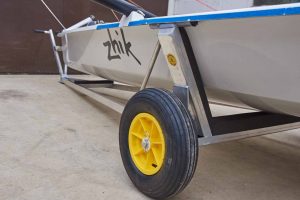 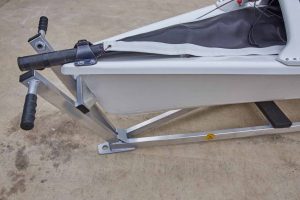 Our new  super light ally trolley for the Musto skiff  is about to be put into production, they will be available directly from us or Ovington Boats.

The channel and foam system which has been very successful over the years  on our 29er and 49er trolleys  has been adapted.  Thanks to Chris Rashley who was kind enough to lend us his boat for the development and design period.

Its not every day of the week a 90 year old dinghy is brought in for a trailer.

the Y and Y site, the new owner is delighted with what is an amazing piece of

history, although he is a bit daunted by the amount of work it requires.

My brief is to make a comfortable and supporting trailer for a very old lady! 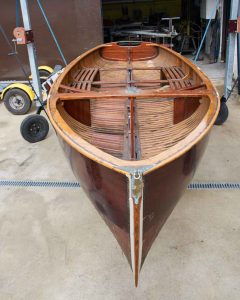 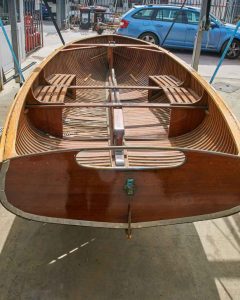 It was really good to get away on Sunday and watch the last day of the 505 Nationals,big seas off Hayling always makes for excellent spectator sport.

The 505 in spite of it’s age  is still one of the purest and most attractive racing dinghy, and at times in those seas with a 90hp on the the rib we were struggling to keep up with them! 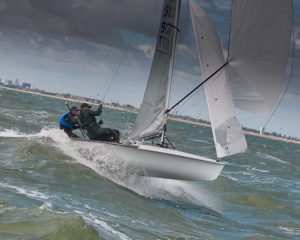 Rates warning, valuation officers could be operating in your area!

The Government have made amendments to Business Rates, the new system is intended to help the High Street, be fairer, and easier to understand, so all good

The reality, well our business rates have increased 45% (which is roughly 15 times the rate of inflation). This is because we are two shop units; if we were one then we wouldn’t pay anything. The simple method for working out your commitment, well you are either multiplier or a SBRR multiplier that is multiplied by your NC, then they take your BL and multiply that by your AF and then deduct your NC, obviously a child could work that out.

Thus far our new rates are far more expensive, totally unfair, and virtually impossible to work out. My colleagues and friends with business’s locally are also not overly impressed with the new system, so I invited Richard Cornelius Leader of the Council and Matthew Offord our MP to the shop to discuss this with us.

The meeting was cordial and honest, but the bottom line is Rates are a poor tax system and the latest amendments have just made them worse.

Quick one, with Parliamentary candidates before an election who are interested in sailing, I generally offer them blinding deals and tell them that even though they were just club sailors we could easily turn them into champs. Then after the election I just deny it all. 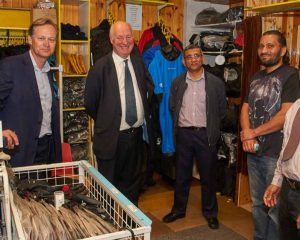 After 3 years of arguments 63 telephone calls a number of solicitor meetings our neighbours decided to repair their drain. That having been said they still would not have entertained spending the £350 to stop the foul fluids flooding our yard had it not been for the diligence of my new best friend Colin Bowell from Barnet Environmental Services ( no fiction that really is his name), who in the end made them an offer that even they couldn’t refuse.

We were then  able to replace all the horrid broken concrete  and now we look even more like a  Mclaren manufacturing centre, ( cars not prams).

In truth it has been quite a challenging 10 days trying to keep production going, however it is all now finished, all good then and now  we are back to living the dream. 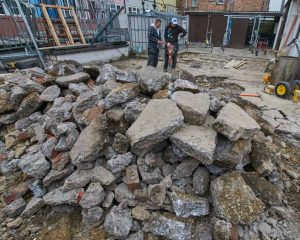 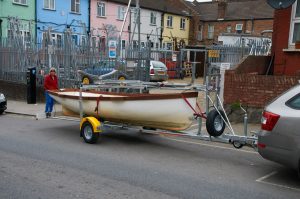 to lose our cradles, ( it is interesting there is always something or someone) we managed to finish the double Gig trailer, its off to Cork in two weeks time. The top boat will be placed upside down, its know as a clamshell double, we wish them well and thanks for the order.

When everything goes to Plan.

Today Friday at 10.30 a 7 ton lorry pulls up at the gate of the yard, its the galvaniser.  If the steel distributor gets in on Tuesday, the Welding gas supplier on Wednesday, all the plant behaves itself, all the drawings are correct, and all our brains have been functioning throughout  the week, then and only then will the weeks production be collected.

Next Tuesday all those dirty black frames will be bright shiny Sovereign trailers, ready to start a life on the road! 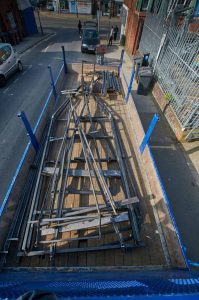 A log jam at the galvanisers has delayed work due in over the weekend , which in truth is the last thing we need at this point of the year.

However it meant we were able to go down to the Harp and watch the Merlin Open Meeting, conditions were at times brutal so it made for great spectators sport and an excellent day to take photoes. 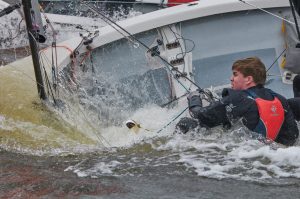 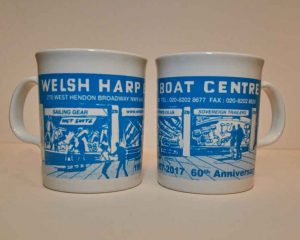 Well we are now officially 60 if we were married it would be our diamond anniversary. We have chosen not to hand out diamonds to our regular and loyal customers, that would have been very generous but rather expensive, instead we decided on these rather smart mugs!    Very  appropriately we got them from dear old Rob Dulson of Base One who is himself a diamond among men!